Russia was chosen hosts of 2018 World Cup even before voting: Sepp Blatter

Russia was chosen hosts of 2018 World Cup even before voting: Sepp Blatter 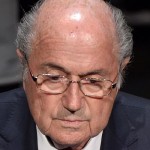 In a shocking revelation, suspended FIFA president Sepp Blatter has suggested there was an agreement in place for Russia to host the 2018 World Cup, even before the voting took place. The 79-year-old told Russian news agency Tass that the tournament was always lined up to go to Russia with the 2022 World Cup to be held in the US – until Michel Platini decided to back Qatar.

When asked whether it was a mistake to hold voting for the 2018 and 2022 tournaments simultaneously, Blatter said, “It was agreed inside the group that we go to Russia because it has never been to eastern Europe, and for 2022 we go back to America.

Blatter also blamed Platini for the ongoing crisis in FIFA.

“Platini wanted to be FIFA president, but he didn’t have the courage to put himself forward (in the May 29 election in which Blatter saw off Prince Ali Bin Al Hussein for his fifth term of office).

“And now look where we are! And the victim of all this at the end of the day is Platini himself!”

Both Blatter and Platini are serving suspensions from all football-related matters over a $2million (1.8 million euro) payment the UEFA boss received from Blatter on behalf of FIFA in 2011 for consultancy work carried out years before.

Blatter is facing criminal proceedings over the payment and the sale of cut-price television rights.

The ban means Platini, one-time favourite to succeed Blatter, can take no part in the election campaign until the suspension is lifted and he is cleared of any potential wrongdoing.

FIFA announced Wednesday that Platini was one of seven official candidates to succeed Blatter.