Russia, US ink MoU to avoid deconfliction between their air forces over Syrian skies

Russia, US ink MoU to avoid deconfliction between their air forces over Syrian skies 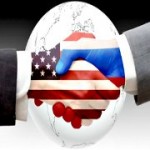 Russia and United States have signed a Memorandum of Understanding (MoU) to avoid deconfliction and mid-air incidents between their air forces over Syrian skies. The MoU seeks to avoid direct clashes between both air forces in the skies over Syria. It also includes steps to be taken by pilots to avoid an inadvertent clash over Syria. Key facts The text of the MoU has not been disclosed and remained secret but it has laid out means and protocols for both sides to communicate and establish a hotline on the ground. It also contains a number of rules and restrictions aimed at …Read More