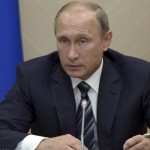 Russian President Vladimir Putin has signed a decree imposing a package of economic sanctions against Turkey following its downing of a Russian Su-24 bomber in Syria. The measures include banning several Turkish organizations and the import of certain goods.

A decree on “measures providing the national security of the Russian Federation and the protection of its citizens against criminal and other unlawful acts, and on imposing special economic measures in relation to Turkish Republic” was signed on Saturday, the Kremlin press service said. Read More