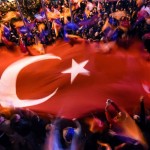 AKP won 316 seats of total 550 members of the Grand National Assembly of the Parliament by securing 49.4 per cent of the votes. Main opposition Republican People’s Party (CHP) won 134 by securing 25.4 per cent votes.

The 2015 Turkish general election was snap election which was held throughout country Turkey to elect 550 members to the Grand National Assembly. The snap election was called by President Recep Tayyip Erdoğan in August 2015 after coalition negotiations between the ruling AKP and the opposition broke down. It was the 25th general election in the history of the Turkish Republic and elected the country’s 26th Parliament. Read More