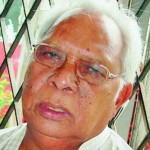 Renowned theatre artiste and writer Chatla Sriramulu, (84) has passed away at Secunderabad Railway Hospital.  Born in Vijayawada on December 5, 1931, he worked with the Railways in early days of his career. But his interest in acting drew him towards the theatre, where he grew as one of the well known personalities of his generation. Sriramulu acted and directed more than 100 plays and wrote several books. With his unique acting skills, he went on performing on stage across the country and abroad also.

He also acted in two Tollywood movies, ‘Swpana’ and Chiranjeevi’s ‘Nyayam Kavali’. He  trained popular Telugu actors Nagarjuna and Venkatesh in acting.. Sriramulu was instrumental in the establishment of popular literary and cultural organisation Rasaranjani which was dedicated to the field of theatre arts. Among his plays, ‘Maro Mahenjodaro’ is considered the best of his works. Read More