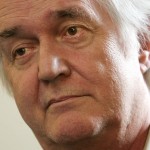 Renowned and bestselling Swedish crime writer Henning Mankell passed away in Gothenburg, Swedan. He was 67. He was best known for a series of mystery crime novels starring his most noted fictional creation Inspector Kurt Wallander.

Henning Mankell was born on 3 February 1948 in Stockholm, Sweden. Apart from being crime writer he was also children’s author and dramatist. His debut crime novel The Stone-Blaste was published in 1968. Read More