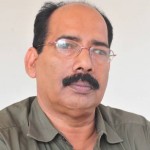 Noted Malayalam novelist and short story writer Akbar Kakkattil passed away at a private hospital here this morning. He was 62 and is survived by wife and two children.Kakkattil was undergoing treatment for a lung-related ailment for a year and the end came early this morning. He has 54 books to his credit which includes, four novels, 27 short stories, six collections of essays, seven novelettes, a play, among others.