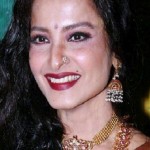 The Veteran Bollywood actress Rekha to be honoured with Yash Chopra Memorial Award for the year 2015. She is third recipient of this award. The award has been given by TSR Foundation of T Subbrami Reddy. The actress will be given the honour on February 2016 by the Governor of Maharashtra in Mumbai.

This award is given on remembrance of producer-director Yash chopra, who died in 2012.