U K Sinha gets extension as Sebi chief 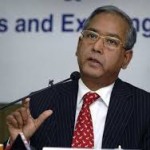 U K Sinha will remain Sebi Chairman till March 1, 2017 with the government today extending his term by over a year.

The extension for Sinha, whose current term was to end on February 17, was approved by the Appointments Committee of the Cabinet headed by Prime Minister Narendra Modi.During his tenure, Sebi has implemented a number of reforms in the capital markets including regarding IPOs, mutual funds and corporate governance. Some of the key initiatives announced recently include a new regime for listing of startups, while Sebi has also launched a major crackdown on market manipulators including those misusing the stock exchange platform for tax evasion and money laundering.