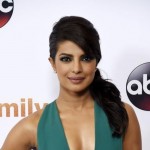 Bollywood star Priyanka Chopra has made it to the final nomination in the Favourite Actress in a New TV Series category of People’s Choice Awards 2016.

The 33-year-old actress, who has made it to the top five, will be competing with big names like Jamie Lee Curtis, Emma Roberts, Marcia Gay Harden and Lia Michele.