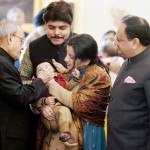 The President of India Pranab Mukherjee launched the Pulse Polio programme for 2016 by administering polio drops to children less than five years old, at the Rahstrapati Bhawan. The programme has been launched in the presence of the Union Minister of Health & Family Welfare Shri J P Nadda. In the upcoming National Immunization Day, around 17.4 crore children of less than five years across the country will be given polio drops as part of the drive of Government of India to sustain polio eradication from the country.

As polio is now endemic in only two countries, Afghanistan and Pakistan, the world is at last stage of polio eradication.  In order to mitigate the risk of importation, the immunity against polio infection is maintained through National and Sub National Polio rounds along with sustained high quality polio surveillance.