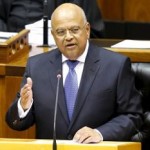 Veteran Indian-origin politician Pravin Gordhan has been appointed South Africa’s new Finance Minister by President Jacob Zuma who fired two of his predecessors within a week amid a raging economic turmoil in Africa’s second-largest economy.

66-year-old Gordhan’s appointment comes after a huge controversy amid mounting pressure on Zuma to quit after he dismissed Nhlanhla Nene as Finance Minister, without giving reasons, drawing widespread criticism even from within the ranks of his own African National Congress.