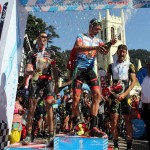 Luis Leao Pinto of Portugal has won 2015 MTB Himalaya Title, Asia’s premier mountain biking race for the second time in the Solo Men’s category. With this victory he received the crown tile of ‘King of the Himalaya’ which he had earlier won in year 2013. He took time of 27:29:22 to complete 500 km long 7 stages biking race which ended at Shimla, Himachal Pradesh. Results of Solo Men’s category: Luis Leao Pinto (Portugal), Andi Seewald (Germany), Pau Zamora (Spain). Open Women’s Solo category: Catherine Williamson from United Kingdom has emerged as winner in the Open Women’s Solo category. She was followed by Ilda Periera of Portugal and Laxmi Magar from Nepal for second and third position respectively. Read More