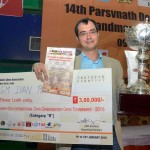 Russia’s Ivan Popov suffered a surprise last-round loss but was not to be denied the 14th Delhi International Open chess title. Popov claimed the winner’s trophy and Rs. three lakh. Ukraine’s Valeriy Neverov inflicted a 43-move defeat with white pieces to force a three-way tie at eight points. But Popov clinched the title on a superior tie-break score ahead of runner-up Hungarian Attila Czebe and third-placed Neverov.

In fact, Vitaly Sivuk did Popov a favour by holding Czebe in 30 moves on the second board. After Popov’s loss, a victory for Czebe would have given him the title. M.R. Lalith Babu justified his presence in the event as the highest-rated Indian and defeated Ukraine’s Yuri Solodovnichenko in 68 moves to be among the six players tied for the fourth spot with 7.5 points.