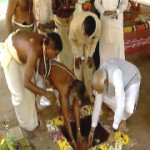 Prime Minister Narendra Modi laid the foundation stone Amaravati, a new capital city of Andhra Pradesh on the occasion of Dussehra and Vijaya Dashmi. The foundation stone of new futuristic capital city of the state was laid at a grand ceremony held in Guntur district. Andhra Pradesh Chief Minister N. Chandrababu Naidu along with other guests participated in the rituals to mark laying the foundation. Key facts The name Amaravathi was chosen in view of the historical, spiritual and mythological significance as it was ancient seat of Satavahana kingdom. Located between Vijayawada and Guntur region of state on the banks of Krishna River…Read More