Philippines evacuates 700,000 ahead of Typhoon Melor 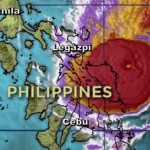 Hundreds of thousands of people have been evacuated in the central Philippines, where a fierce storm is lashing coastal areas with heavy wind and rain.

Typhoon Melor intensified rapidly over the weekend as it moved toward the eastern island of Samar.

On Monday, it skirted along Samar’s northern coast, pummeling it with maximum sustained winds as strong as 215 kph (130 mph), the equivalent of a Category 4 hurricane, according to the U.S. military’s Joint Typhoon Warning Center. Read More