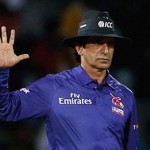 Tainted Pakistani umpire Asad Rauf was on Friday banned for five years by the BCCI after its disciplinary committee found him guilty of corrupt practices and bringing the game into disrepute.The 59-year-old Rauf, who was part of the ICC’s elite panel and officiated in Test matches, was accused of accepting expensive gifts from bookies besides placing bets on IPL matches in the 2013 edition.

Read More At The Times of India