Home » Current Affairs » Over 1 million refugees in Europe in 2015: UN 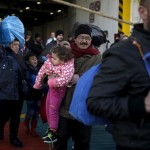 The International Organization for Migration said more than 1 million refugees and migrants came to the European Union this year, while almost 3,700 died or went missing in perilous journeys which reaped huge profit for smugglers. Almost all those arriving came across the Mediterranean or the Aegean Seas, and half were Syrians fleeing the war. Another 20 percent were Afghans, and 7 percent were Iraqis, IOM and the U.N. refugee agency UNHCR said in a joint statement. People smuggling operations probably accounted for the majority of journeys and likely earned at least $1 billion.

Out of a total of 1,005,504 arrivals to Greece, Bulgaria, Italy, Spain, Malta and Cyprus by Dec. 21, the vast majority — 816,752 — arrived by sea in Greece. The record movement of people into Europe is a symptom of a record level of disruption around the globe, with numbers of refugees and internally displaced people far surpassing 60 million. Read More