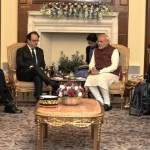 Prime Minister Narendra Modi on Monday said only the financial details needed to be worked out in finalising the much-awaited purchase of Rafale fighter aircraft from France, adding this, too, would conclude soon.Modi had announced India’s intention to purchase 36 Rafale medium multi-role combat aircraft of French aerospace major Dassault during his visit to Paris last year. The value of the deal is expected at around Rs.60,000 crore.