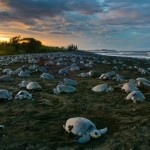 Odisha Government has imposed seven-month ban till May, 2016 on fishing along the Puri coast in order to protect the endangered Olive Ridley sea turtles. This ban comes prior to arrival of Olive Ridley turtles for nesting in winters along the east coast of Odhisha.

Trawlers and fishermen are banned to fish within 20 kms from coastline in the turtle nesting sites. State Forest Department has set up turtle protection camps including 3 offshore camps in Gahirmatha marine sanctuary. It also has set up on-shore camps at 13 places in addition to 4 temporary incubation centres for safety of eggs. Every year endangered Olive Ridley turtles arrive during winters for mass nesting in Rushikulya river mouth and Gahirmatha marine sanctuary along Odisha coast. The coast is considered as the only place apart from Costa Rica to witness mass nesting by Olive Ridleys. Every year, between 5 lakh to 10 lakh turtles come to the state for mass nesting.

Scientific name: Lepidochelys olivacea. They are also known as the Pacific ridley sea turtle. Generally found in warm and tropical waters, primarily in the Pacific and Indian Oceans. Protection Status: Listed as endangered species in IUCN Red Data Book because of their few remaining nesting sites in the world. Protected under Schedule-I of Wildlife (Protection) Act, 1972 of India. Read More