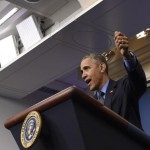 President Obama has signed a $1.1 trillion funding bill that will keep the federal government running until September 30, 2016. The Senate gave final congressional approval to the bill, which includes nearly $700 billion in tax breaks. The Senate adopted the Omnibus Appropriations Act by a vote of 65-33; the House did so by a 316-113 tally. The law comes as a shock for the Indian IT companies as they would have to pay millions of dollars while applying for H-1B visas, as they heavily rely on this work visa for highly skilled IT workers to get their work done in the US.

Indian IT companies have termed it as highly discriminatory and punitive as the text of the legislation has been written in such a way that such a high fee would have to be paid by only major Indian IT companies. Read More