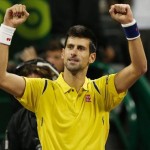 World number one Novak Djokovic claimed his first title of the year with an impressive 6-1 6-2 win over Rafael Nadal in the Qatar Open. The Serb continued his recent dominance of the 14-time Grand Slam title winner with a ninth victory in 10 meetings – the last five in straight sets. The 28-year-old broke twice in both sets as Nadal, 29, had no answer to the pace and power of his groundstrokes. Djokovic is preparing to defend his Australian Open title from 18 January.

This was Djokovic’s most convincing victory against Nadal in their 47 meetings, a head-to-head he leads for the first time. Nadal made just 13 unforced errors but was bullied off the court by an inspired opponent who gave him perhaps the most uncomfortable 73 minutes he has faced on court.