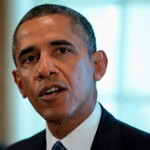 “We do…we have an alliance commitment with the Republic of Korea that we take very, very seriously. Obviously, nobody wants to see it come to that. But we have a robust military presence there on the peninsula that is, as they say, they’re ready tonight if they need to be,” State Department Spokesperson John Kirby said, even as the U.S. reached out not only to its Asian partners including Japan, but also to China, seeking to use its influence – waning as it might be – over the Communist North.