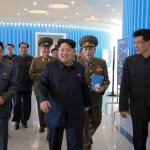 North Korea’s ruling party said Friday it will hold its biggest convention in decades next May.

The Workers’ Party said in a dispatch carried by state media that it has decided to hold its 7th congress as the North is faced with “the heavy yet sacred task” of building a “thriving” nation. It didn’t elaborate on what it will discuss.

Since taking power after the death of his dictator father in late 2011, Mr. Kim has been struggling to revive his country’s moribund economy and grappling with an international standoff over the North’s nuclear and missile programs. He rules the country with a slew of high-profile posts, including the first secretary of the Workers’ Party.

The Workers’ Party last held its congress in 1980, when Kim’s father Kim Jong Il made his political debut with an appearance that confirmed he was in line to succeed his father, North Korea founder Kim Il Sung. Other previous congresses elected top party officials, adopted party regulations and discussed major state policies, according to Seoul’s Unification Ministry.

North and South Korea remain divided along the world’s most heavily fortified border since their 1950-53 Korean War ended with an armistice, not a peace treaty…Read More