Home » Current Affairs » None can meddle in the appointment of judges, says President

None can meddle in the appointment of judges, says President

None can meddle in the appointment of judges, says President 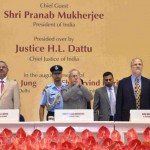 President Pranab Mukherjee on Saturday said no one could meddle in the appointment of judges of the Supreme Court and High Court, and called for adoption of the “highest standards of probity” in the process for appointments. He said the vacancies in judicial positions must be filled up on priority.

Inaugurating the golden jubilee celebrations of Delhi High Court at Vigyan Bhawan in New Delhi, Mr. Mukherjee said whatever system of appointment was followed for appointment of the Supreme Court and High Court judges, it must operate on well-established and transparent principles to select the best.

Mr. Mukherjee’s observations came close on the heels of the Supreme Court striking down the National Judicial Appointments Commission (NJAC) Act earlier this month. “No one can meddle in the process. An autonomous judiciary is a vital feature of democracy. Yet being an important pillar of democracy, it must reinvent itself through introspection and self-correction, as and when necessary,” he said.

The President affirmed in the presence of Chief Justice of India H.L. Dattu and a galaxy of judges, lawyers and jurists that expeditious selection must be no ground for sacrifice on quality. He also said the courts must have enough resources to boost their infrastructure and the pendency of cases should be reduced through multi-dimensional efforts.

Laying emphasis on pluralistic character of the country, which had stood the test of time, Mr. Mukherjee said the nation had thrived due to its power of assimilation and tolerance. “Our ancient civilisation has over the centuries accommodated our diversities. Multiplicity is our collective strength which must be preserved at all costs,” he said.

Justice Dattu said the judges of the present generation had inherited judicial discipline from illustrious judges of the past. While calling for unflinching integrity in the performance of judicial functions, he said the Courts could achieve high rate of disposal of cases with the help of the Bar…Read More