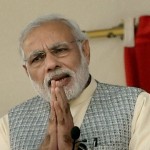 The decision to abolish interviews for Class-III and IV government jobs will come into effect from Friday, with Prime Minister Narendra Modi today describing it as a “New Year Gift” which will “free the youth from corruption”.“From tomorrow, interviews for government jobs in Class-III and Class-IV categories will be abolished,” Modi tweeted about the decision which will impact over 29 lakh central government posts. “This will help curb corruption,” he said. Modi’s tweet came soon after he talked about the issue at an event in Noida, near here, while laying the foundation stone of a 14-lane expressway connecting Delhi with Meerut…Read More