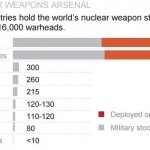 Russia and United States are the top two countries with the most number of nuclear stockpiles, with France at 300 and closely followed by China at 260, according to data released by Federation of American Scientists.

The data shows the blast yield of the North Korea hydrogen bomb test as compared to the Hiroshima atomic bomb.