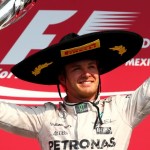 Nico Rosberg(Germany) won the Mexican Grand Prix for Mercedes on November 1 after a 23-year absence. Rosberg is a first winner in Mexico since 1992. Rosberg beats three time world champion Lewis Hamilton into second place. The German`s fourth victory of the year, and 12th of his career. The battle between the Mercedes men but Rosberg always had the edge in the final session and the two shook hands at the end. Hamilton was out first but locked up and allowed the German to take the advantage. Rosberg, who won the contest by 0.188s.

Valtteri Bottas drove a composed race to finish third ahead of Daniil Kvyat, who is improving every race, and has maintained his lead over teammate Daniel Ricciardo in the championship after the Australian finished fifth.

While Sebastian Vettel crashed on Lap 51, after an incident packed race including a tyre puncture on Lap 1, which put him at the back and a spin after he had made his way back up to 12th.

Driving in F1 championship is a demanding task. Drivers participating in F1 races gain the required skills and fitness after rigorous training. Here are some interesting facts related to F1 drivers.