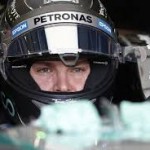 Nico Rosberg beat Lewis Hamilton for the second race in succession to win the Brazilian Grand Prix. The German converted pole position into a lead at the first corner and controlled the race from there, despite Hamilton pushing hard throughout.Hamilton looked faster but in the turbulent air behind Rosberg’s car he was unable to get close enough to try to pass his team-mate.