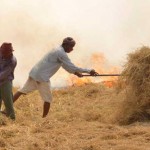 A Bench headed by NGT chairperson Justice Swatanter Kumar directed the Delhi government and the four northern States of Punjab, Haryana, Rajasthan and Uttar Pradesh to check the bi-annual menace, which the farmers engage in to save time between sowing of wheat and rice. The tribunal also announced a fine of Rs. 2,500 to Rs. 15,000 on farmers found indulging in straw burning.

The practice is followed by farmers not only to save time under the rice-wheat crop rotation to clear the land of residue of one harvest and sow the next, it is also believed that it makes the land more fertile and kill pests. In November, farmers sow crops such as wheat and vegetables. They often set fire to their fields to clear them before planting making the atmosphere in Delhi more blinding and suffocating with the smoke moving towards the city. Read More