Nepal’s central bank warns of stagflation due to crisis 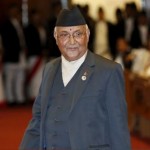 Nepal’s central bank has warned that the country faces the grim prospect of stagflation. The situation will become worse if the political crisis over its new Constitution is not resolved to end the protests by Indian-origin Madhesis. Nepal Rastra Bank (NRB), the central bank, has warned of stagflation as consumer prices shot up by more than 10 per cent in November, while economic growth is expected to drop to lowest in around one-and-a-half decades.

Nepal’s economy was severely hit after the April 25 earthquake followed by the political turmoil in the southern plains by Indian-origin Madhesis for the last four months. Nepal had contained inflation within single digit in the last 23 months. But in November, it stood at 10.4 per cent the highest in the last three years. Read More