Navtej Singh Sarna to be new High Commissioner to UK 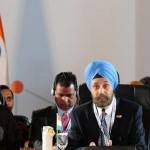 Navtej Singh Sarna, Secretary (West) in External Affairs Ministry, was today named the next High Commissioner to Britain. Mr Sarna, a 1980-batch Indian Foreign Service officer, will replace Mr Ranjan Mathai in London. He is expected to take up his assignment shortly. The appointment comes days ahead of Prime Minister Narendra Modi’s visit to Britain. Sarna, an author of many fiction and non-fiction books, is currently serving as secretary (west) in the ministry.

Sarna was the longest-serving spokesperson of the ministry and its most visible face from 2002 to 2008. He served as India’s ambassador to Israel from 2008 to 2012.

For two years from August 2012, Sarna served as additional secretary in-charge of international organisations. He was then made secretary (west) in the ministry. He represented India at the officers’ meeting at the India-Africa forum summit that has recently concluded. Sarna is also well-versed in Russian and Polish languages and has served in various Indian missions, including Moscow, Warsaw, Tehran, Geneva, Thimphu and Washington.

What is the difference between High Commissioner and Ambassador?

The functions these two individuals perform are the same; there is no difference. Both are of the same rank as well.

Since the United States and Russia were never a part of the Commonwealth, Britain’s diplomatic missions in these countries are called “Embassies”, and not “High Commissions”. The person in charge of one is called “Ambassador”. Read More