Nation pays homage to Mahatma Gandhi on his martyrdom day 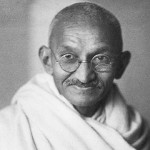 On the 68th death anniversary of Mahatama Gandhi, the nation paid homage to the Father of the Nation. The people of India paid homage to Gandhi on martyrdom day when he was assassinated on January 30, 1948. Programmes will be organised across the country to mark the occasion. All-religion prayers will be held in Rajghat at Mahatma Gandhi’s memorial. Prime Minister Narendra Modi, President Pranab Mukherjee, Vice President Mohammed Hamid Ansari, Defence Minister Manohar Parrikar, and the three service Chiefs will lay wreaths at the memorial of Gandhi. Prayers will also be offered at Sabarmati Ashram in Ahmedabad on his death anniversary.

Gandhi was born on October 2, 1869 in Porbandar in Gujarat. He spent most of his life in the Independence Day struggle.