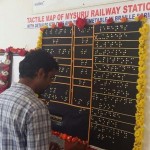 With a view to facilitating visually impaired train passengers, tactile maps of the railway station and train schedules in Braille were unveiled at the Mysuru Railway station on Tuesday.

Along with tactile maps of station describing the location and distance of entrance, platforms, counters, washrooms etc, schedule of trains, showing their arrival and departure time, the authorities have also put up 400 metal signages in Braille along the railings of the staircases leading various platforms. Read More