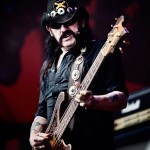 Motorhead frontman Lemmy has died aged 70, two days after learning he had cancer. Lemmy formed the rock group in 1975 and recorded 22 albums, including Ace of Spades, as he became one of music’s most recognisable voices and faces. Lemmy, born Ian Fraser Kilmister, formed Motörhead in 1975 and was its only constant member, as singer and bassist. He lived in Anglesey, Wales, as a child and acquired the nickname Lemmy while at school, although he claimed to have had no idea where it came from.

Ex-Motorhead guitarist “Fast” Eddie Clarke, who played with the group between 1976 and 1982, said on Facebook: “I am devastated. We did so much together, the three of us. Lemmy was credited with introducing punk sounds into the heavy metal genre – and having a wild offstage reputation. Read More