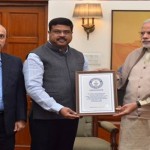 Modi’s pro-poor schemes are bearing fruits. After bringing in more than 19.34 crore poor people in the banking network through the Jan Dhan Yojana, Modi’s Pahal cash transfer scheme is providing subsidy for LPG to 14.62 crore households.

Petroleum Minister Dharmendra Pradhan presented the certificate received from Guinness Book of World Records to the Prime Minister Narendra Modi on Saturday. “The certificate is in recognition of PAHAL as the largest cash transfer programme in the world,” an official release said.