Microsoft Cortana Launched for Android and iOS in Select Regions 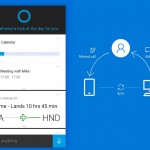 Microsoft’s voice-based virtual assistant Cortana, which ships with every Windows 10 computer, is now available as a general release Android and iOS users in select region. After months of testing, the company announced on Wednesday that Cortana is out of beta ready to be used on rival mobile platforms. It will serve as a companion app to Windows 10 PCs.

Earlier this year, Microsoft announced that it will be bringing Cortana to devices running Android and iOS. The Android public beta of it kicked off in August, and a limited beta rollout on iOS began last month. While both the versions have left testing phase, they are still only available to users in the United States and China for now. Read More