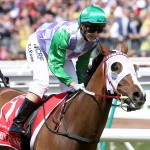 Michelle Payne became the first female jockey to win the A$6.2 million ($4.44 million) Melbourne Cup on Tuesday as she rode rank outsider Prince of Penzance to a famous victory in Australia’s richest and most prestigious race.

Jumping from barrier one, Payne bided her time until well into the final straight before pushing the 100-1 shot clear at the 200-metre mark and held off a charging Max Dynamite by three-quarters of a length.

Local stayer Criterion crossed the line third in the gruelling 3,200-metre handicap at Flemington racecourse in front of a bumper crowd of 100,000 bathed in late spring sunshine. Read More