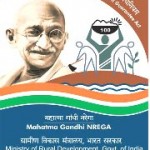 As MGNREGA completes ten years tomorrow, Narendra Modi govermment, which earlier appeared critical of the UPA’s flagship rural job scheme, today hailed the measure saying the achievements of a decade are a “cause of “national pride and celebration”.In a statement, the government also claimed that the last financial year saw a “revival” of the programme and announced that the focus in upcoming years will be towards simplifying and strengthening the procedures of the scheme and towards.

Read More At The Economic Times