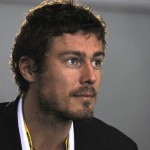 Former World No.1 tennis player Marat Safin of Russia has been inducted in the International Tennis Hall of Fame. It was announced by Russian Tennis Federation and will be formally inducted in the official ceremony scheduled on July 16, 2016.

With this, he will become first Russian national to be inducted in the International Tennis Hall of Fame. Safin’s candidature for the induction into the Hall of Fame was announced in October 2015 along with Justine Henin (Belgium) and Helena Sukova (Czech Republic).