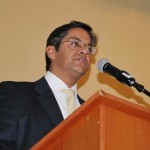 Senior diplomat Manpreet Vohra has been appointed as India’s Ambassador to strategically important Afghanistan, succeeding Amar Sinha. Vohra, a 1988-batch Indian Foreign Service officer, is currently serving as Joint Secretary in the Ministry of External Affairs. He is expected to take up his assignment shortly.  Vohra had served in the Indian High Commission in Pakistan as the Deputy High Commissioner besides having worked in Disarmament and International Security Affairs Division of the External Affairs Ministry. He had also served as India’s Ambassador to Peru.

India and Afghanistan are strategic partners and relations between the two countries are on an upswing. India has invested USD two billion in aid and reconstruction and trained scores of Afghan officers.