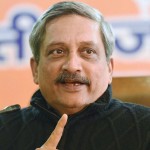 Manohar Parrikar has visited the US Pacific Command headquarters in Hawaii, becoming the the first-ever Indian Defence Minister to visit the key facility in a sign of deepening of military ties between the two strategic partners. The US Pacific Command in a statement described Parrikar’s visit as a “milestone” event during which he held meetings with the PACOM Commander Admiral Harry B Harris. Harris and Parrikar discussed the growth of the strategic partnership between the two nations and how routine, regular and predictable engagements strengthen that partnership, PACOM spokesman US Army Major Dave Eastburn said. The two also emphasised the importance of expanded maritime security cooperation within the context of broader military-to-military ties, especially in the Indo-Asia- Pacific, he said. Read More