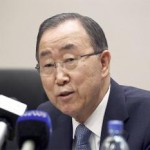 Major General Jai Shanker Menon of the Indian Army, a veteran of peacekeeping operations, has been appointed as the head of a key UN force stationed in Golan to maintain the ceasefire between Israeli and Syrian forces.UN Secretary-General Ban Ki-moon has named Menon as the Head of Mission and Force Commander of the United Nations Disengagement Observer Force (UNDOF).

Read More At The Economic Times