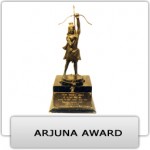 M.R. Poovamma and Babita Kumari have been conferred with prestigious Arjuna Award 2015 for their individual achievements in sports. The award was presented to them by Union Minister of State (MoS) for Youth affairs and Sports Sarbananda Sonowal in New Delhi. M.R. Poovamma has been conferred with this award for her contributions in Athletics and Babita Kumari in the field of Wrestling. About Arjuna Award Established: It was instituted in 1961. Given by Union Ministry of Youth Affairs and Sports to sportsperson in recognition of their outstanding achievement in National sports. Read More