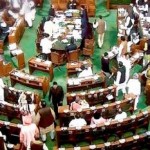 Lok Sabha today passed a bill that will allow state-run NPCIL to have collaboration with other PSUs in the nuclear field even as the government allayed the fears that it will facilitate FDI into the sector or allow participation of a private company in atomic power production.

The Atomic Energy Amendment Bill 2015 proposes to amend the 1962 Atomic Energy Act to change the definition of “government company” in the Act with a view to expand its scope by including such joint venture companies as may be formed between NPCIL and other PSUs, according to the statement of object and reasons. Read More