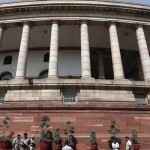 The Lok Sabha on Wednesday passed the Commercial Courts, Commercial Division and Commercial Appellate Division of High Courts Bill, 2015, by a voice vote.

It was introduced in the Lok Sabha on December 7 by Law and Justice Minister DV Sadananda Gowda.

Replying to a debate on the Bill that stretched over three hours, the minister said it has been brought forth to ensure speedy justice in commercial matters. Read More