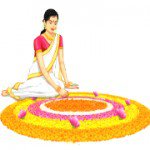 Biggest harvest festival of Thiru Onam was celebrated by Keralites across the globe. Various cultural and religious programmes were organized throughout southern state of Kerala to celebrate the Onam. The festival falls during the Malayalam month of Chingam (August- September). It is reminiscent of Kerala’s agrarian past and is considered to be a harvest festival. It is also the state festival of Kerala. Celebration Traditions The festival marks the commemoration of Vamana avatara of Lord Vishnu and the subsequent homecoming of the mythical King Maha Bali and his prosperous rule. Read More

India’s largest power generator National Thermal Power Corporation (NTPC) Limited has achieved a record of highest single-day electricity generation of over 733 million units. The record generation of electricity on August 27, 2015 was achieved from NTPC’s 18 coal-based power plants, and 8 solar and hydro power stations and 7 gas-based units. On the record day, the Declared Cumulative Capability (DCC) of the stations was 91.10 per cent and Plant Load Factor (PLF) was of 86.34 per cent. Read More

India APJ Abdul Kalam. It was decided by New Delhi Municipal Corporation (NDMC) to rename road as APJ Abdul Kalam Road, as the jurisdiction of the road comes under it. The decision was taken by NDMC in which is in charge of central Delhi, after it received clearance from the Union Ministry of Home Affairs. It should be noted that, the road was earlier named after the Mughal emperor Abul Muzaffar Muhi-ud-Din Muhammad Aurangzeb. He had ruled much of the Indian subcontinent from 31 July 1658 to 3 March 1707. It is also said that, Aurangzeb Road is India’s richest road where property prices are the highest in India and is located in the heart of Lutyens’ bungalow zone. The road begins at the Taj Mansingh hotel near India Gate and joins Safdarjung Road near the official residence of the Indian Prime Minister.

Union Government has launched an e-payment module to make the payment of compensatory levies into the Compensatory Afforestation Management Planning Authority (CAMPA) Funds. It was launched by Union Environment Minister Prakash Javadekar in New Delhi in order to make these payments for diversion of forest land quicker and more transparent. The e-payment module has a designated account for the payment purpose, depending on the States in which the forest land is proposed to be diverted. Initially, the payments will be allowed through two modes viz. online challan mode through RTGS and NEFT and offline challan mode. The deposit of compensatory levies through the e-portal will be optional till August 31, 2015 and will be accepted only through the e-module from 1 September 2015. With the launch of the e-payment portal, henceforth no payments will be accepted other than through the portal or unless specifically ordered guidelines issued by Ad-hoc CAMPA. What is CAMPA Fund? Read More

Every year August 29 is being observed as National Sports Day across the country. Significance: The day marks the birth anniversary of Hockey Wizard, Major Dhyan Chand. On this National Sports awards including Rajiv Gandhi Khel Ratna, Arjuna Awards and Dronacharya Awards are bestowed upon sports personalities by the President of India. About Major Dhyan Chand He was born on 29 August 1905 in Allahabad, Uttar Pradesh. The legendary player is widely considered as the greatest field hockey player of all time. He had started playing hockey only after joining the Army at the age of 16. He was famously known as ‘The Wizard’ for his superb ball control and had scored more than 1000 goals during his international career. Chand is mostly remembered for his extraordinary goal-scoring feats, in addition to earning 3 Olympic gold medals in field hockey in 1928 (Amsterdum), 1932 (Los Angeles) and 1936 (Berlin) Read More

President Pranab Mukherjee presented the Nation Sports Awards in various categories at a function held at Rashtrapati Bhavan on August 29, 2015 on the eve of National Sports Day. Rajiv Gandhi Khel Ratna Award Sania Mirza– In recognition of her outstanding achievements in game of Tennis. Presently she is ranked no 1 women’s player in Women’s Double category. Read More

Mountaineer Jot Singh of Indo-Tibetan Border Police (ITBP) has been honoured with the Tenzing Norgay National Adventure Award 2014-15. He was bestowed with the award by President Pranab Mukherjee during the national sports awards presentation ceremony held at the Rashtrapati Bhavan on the eve of National Sports Day observed on 29 August. With this, Inspector Jot Singh became 11th ITBP official to receive this honour. He is one of the best mountaineers of ITBP and has been undertaking expeditions. He also has scaled the Mount Everest. ITBP is India’s mountain-trained armed force and also known as special force for mountaineering skills. Since 1962, it has been deployed primarily to guard high altitude Indo-China border. Other Recipients of Tenzing Norgay National Adventure Award 2014-15: Ms. Arunima Sinha (Mountaineering), Wg. Cdr. Paramveer Singh (Aqua Sport), Lt. Col Satyendra Verma (Sky diving) and Col. Satish Chander Sharma (Mountaineering). Read More