Justin Trudeau sworn in as Prime Minister of Canada 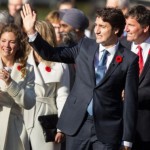 His ascension marks a new era of Liberal politics after an election that saw Stephen Harper’s party ousted.

Mr Trudeau, 43, follows in the footsteps of his father who held the office for nearly two decades.

Mr Trudeau whispered “I love you” to his family upon being sworn in. Read More