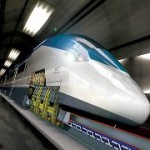 Japan has offered soft loan of 15 billion dollars (Rs 90,000 crore) at an interest rate of less than 1 per cent to India’s ambitious first bullet train project viz. Mumbai-Ahmedabad high speed rail corridor along with technology. In this regard, Japan International Cooperation Agency (JICA) has submitted its report to the Union Railway Ministry. In its report JICA has envisaged a reduction in the travel time on the 505-km long corridor between the two western cities to 2 hours from the existing period of over 7 hours. The report also has mentioned that the bullet train is expected to run at speeds of around 300-350 km/hour…Read More