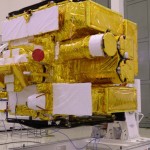 India’s first dedicated satellite for astronomy research Astrosat has been successfully launched from Satish Dhawan Space Centre, Sriharikotta. It was launched along with 6 foreign satellites by the ISRO’s work horse Polar Satellite Launch Vehicle-C30 (PSLV-C30).
About Astrosat
Astrosat is India’s first dedicated multi-wavelength space observatory and one of the major scientific mission after the highly acclaimed Chandrayaan-I and Mangalyaan.
Functions: As a space observatory it has ability to observe celestial bodies like cosmic X-Ray sources and distant stars in different wavelengths simultaneously.
It will observe the universe through ultraviolet, optical, low and high energy X-ray components of the electromagnetic spectrum. Read More